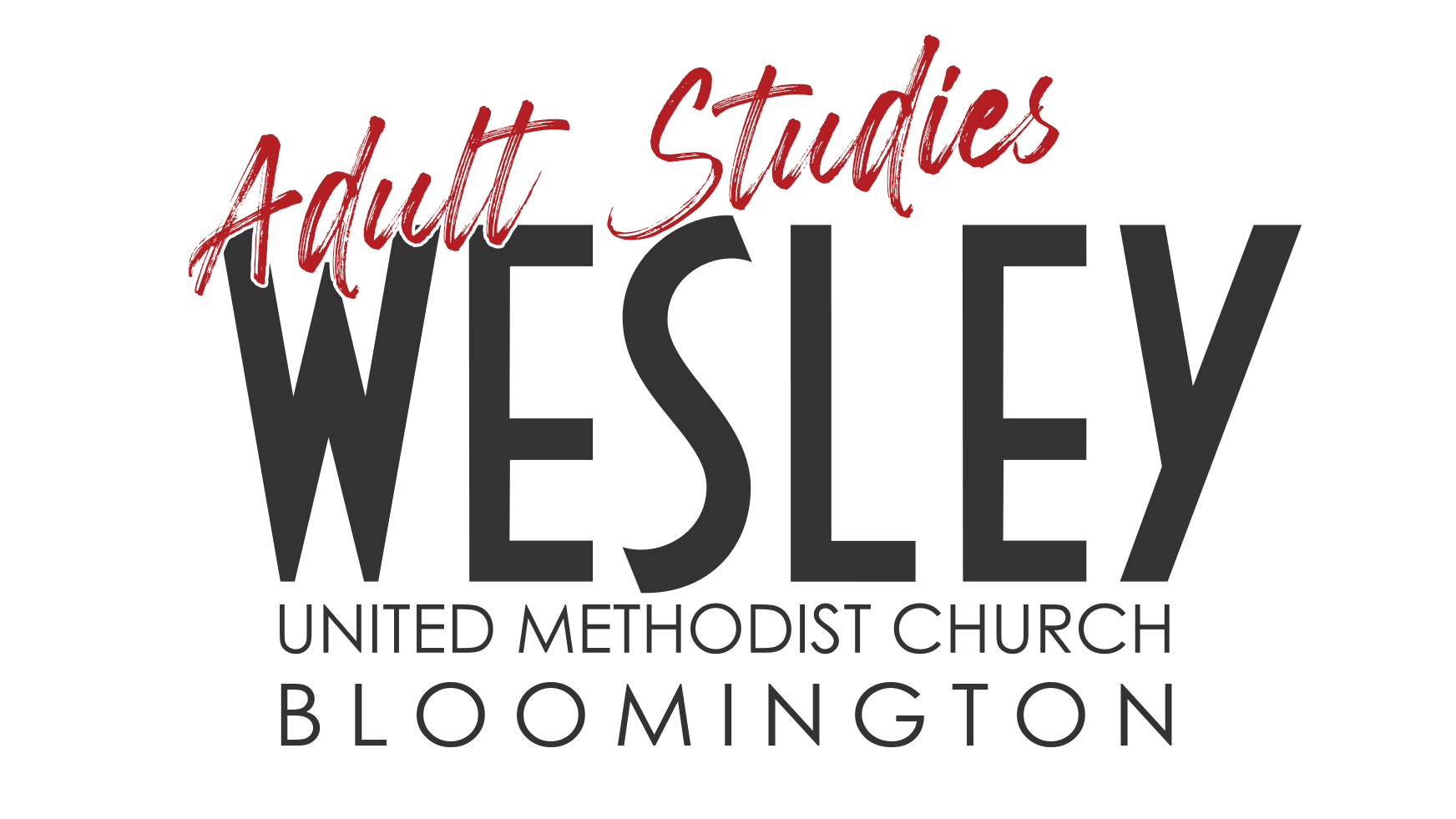 As it is the mission of Wesley United Methodist Church "To Make and Nurture Disciples for Jesus Christ," the Adult Ministries at Wesley seek to prepare, challenge, and inspire women and men to a life of Christian discipleship. It is our desire and mission that every adult becomes a full and fulfilled disciple of Jesus Christ, and that each person will have a passion for Christian service whether it is across the street or around the globe.

Please take a moment to view the many opportunities and resources listed below that are available to the adults book study participants at Wesley. We hope that you will find that these resources will help bring spiritual depth to your life and greater effectiveness service and ministry. Enjoy your studies and become closer to God and the teachings of Jesus Christ.

So you've just taken a look at our ongoing adult book study groups and have found a great group for you to explore. Excellent- we are looking forward to seeing you join! Simply fill out the brief information form below so we are sure to make a spot just for you. Enjoy your studies and remember that your friends are always welcome! For additional guest registration or information on book purchases, links, and other online material, please contact Kathi Pritts. 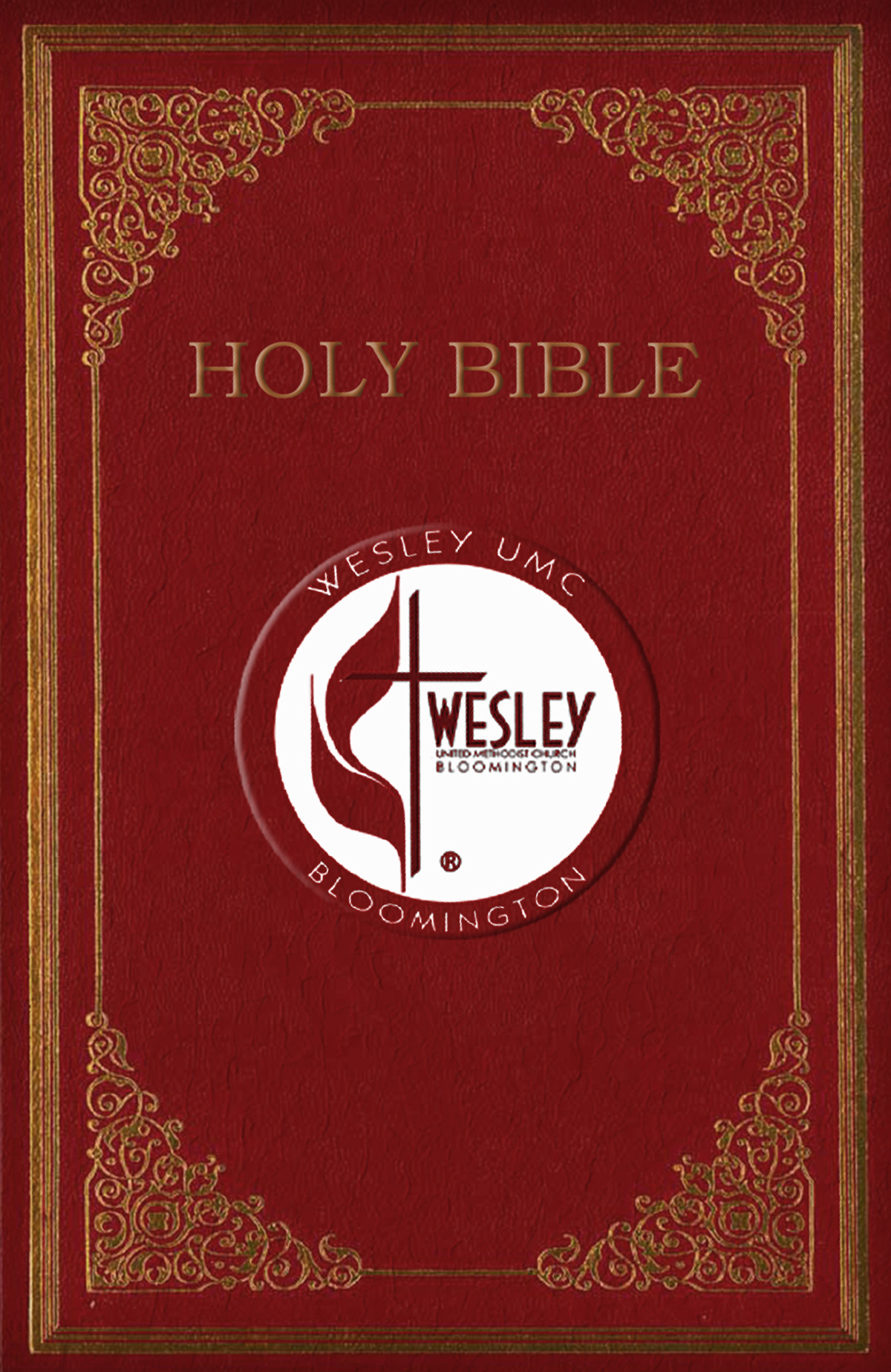 The Book of Daniel

We are offering a bible study in Daniel for the parents of the children attending the variety of ministries on Wednesday @ Wesley. This study will be held in the lounge at 6:00pm where will be pondering the following questions:

Using the NIV version of the bible for this study, we will be meeting to help answer these questions and more.

Named after its writer, Daniel’s book is a product of his time in Babylon as a Jewish exile from Israel. While still a young man, Daniel traveled to Babylon with a group of young Israelite nobles, men of promise whom the conquering power felt could be of use in service (Daniel 1:3–4). Once Daniel arrived, the leadership in Babylon renamed him Belteshazzar in an effort to more closely identify him with his new home (1:7). Daniel lived there throughout the Jews’ seventy-year captivity (1:21; 9:2), eventually rising to become one of only three administrators over the provincial governors throughout the kingdom (6:1).

Daniel recorded his experiences and prophecies for the Jewish exiles during his time in the Babylonian capital, where his service to the king gave him privileged access to the highest levels of society. His faithful service to the Lord in a land and culture not his own makes him unique among almost all the people of Scripture—Daniel stands as one of the only major figures in the Bible to produce a completely positive record of his actions. 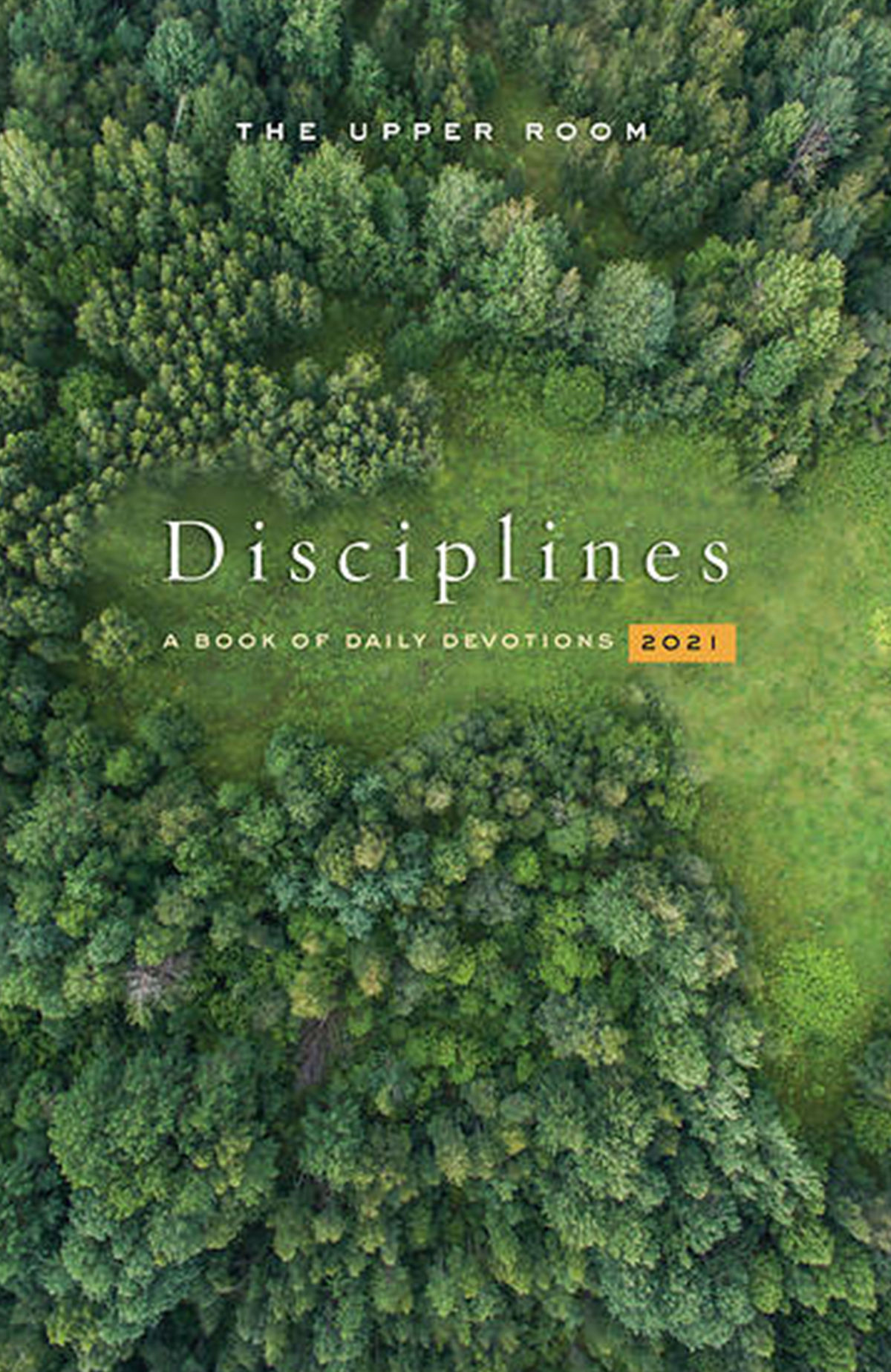 Join us for a continuous women's study

Tuesday mornings at 8:00am.
This is an ongoing study.
in-person/zoom

How important is it to have a daily spiritual routine? The habit of reading and reflecting on God’s Word daily can bring a much-needed respite from the grind of everyday life. “We sometimes experience seasons in our lives when our faith seems dormant,” Junius Dotson wrote in the 2018 edition of The Upper Room Disciplines. “It’s especially important to practice the daily discipline of scripture devotion in our seasons of winter,” he remarked. “When we engage in daily spiritual formation, we deepen our roots . . . and grow our capacity to handle any season of life.” Daily devotional reading is essential to our spiritual growth, and it helps keep our faith alive.

Disciplines invites readers to spend unrushed time with God, reading a lectionary-based scripture passage, reflecting on the author’s insights, and thinking about how to apply the truths from the readings to their daily life. This devotional book features 53 authors from diverse backgrounds, including some of the leading Christian thinkers of our time.

Click here for more information Expand
Journey Bible Study will continue meeting via zoom on Tuesday evenings (6:30 to 8:30) starting on September 14. Judy Bute will be the zoom master. Interested persons can contact Fran Tatum or Judy Bute
We will be studying the Revelation of John, the last book of the Bible. Barb Phend will be leading this study.

Revelation to John, also called Book of Revelation or Apocalypse of John, abbreviation Revelation, last book of the New Testament. It is the only book of the New Testament classified as apocalyptic literature rather than didactic or historical, indicating thereby its extensive use of visions, symbols, and allegory, especially in connection with future events. Revelation to John appears to be a collection of separate units composed by unknown authors who lived during the last quarter of the 1st century, though it purports to have been written by an individual named John—who calls himself “the servant” of Jesus—at Patmos, in the Aegean Sea. The text includes no indication that John of Patmos and St. John the Apostle are the same person.

The book comprises two main parts, the first of which (chapters 2–3) contains moral admonitions (but no visions or symbolism) in individual letters addressed to the seven Christian churches of Asia Minor. In the second part (chapters 4–22:5), visions, allegories, and symbols (to a great extent unexplained) so pervade the text that exegetes necessarily differ in their interpretations. Many scholars, however, agree that Revelation is not simply an abstract spiritual allegory divorced from historical events, nor merely a prophecy concerning the final upheaval at the end of the world, couched in obscure language. Rather, it deals with a contemporary crisis of faith, probably brought on by Roman persecutions. Christians are consequently exhorted to remain steadfast in their faith and to hold firmly to the hope that God will ultimately be victorious over his (and their) enemies. Because such a view presents current problems in an eschatological context, the message of Revelation also becomes relevant to future generations of Christians who, Christ forewarned, would likewise suffer persecution. The victory of God over Satan and his Antichrist (in this case, the perseverance of Christians in the face of Roman persecution) typifies similar victories over evil in ages still to come and God’s final victory at the end of time. 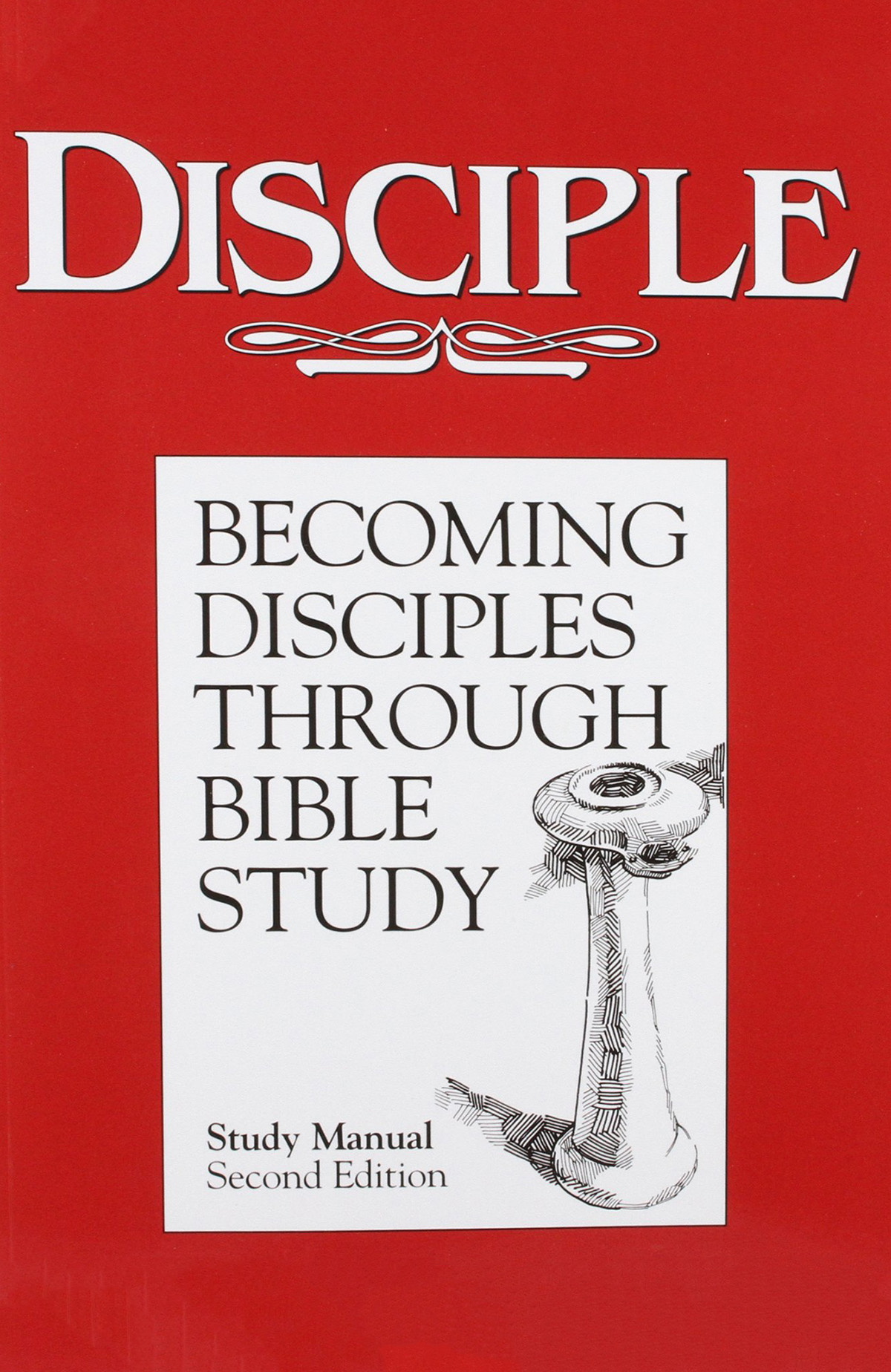 The study gives the Old and New Testaments equal time, emphasizing the wholeness of the Bible as a revelation of God. DISCIPLE draws upon the work of scholars, the personal Bible reading and study of the participant, and dynamic group discussion to aid understanding of the Bible.

The first study in the program is DISCIPLE: BECOMING DISCIPLES THROUGH BIBLE STUDY, a thirty-four week overview of the entire Bible.

Study Manual
Each member of the group needs a study manual and a Bible. The Bible is the text for the study and the study manual will guide group members in their study and preparation for the weekly group session. The study manual also includes suggestions for individual and study-related activities. Space is provided for taking notes while reading Scripture, for recording thoughts and questions arising out of daily study, and for notes during the weekly group session.

The titles of the sessions along with theme words and theme verses, and major persons, events, and topics will set the sequence of the biblical story in the minds of the participants. The principal Scripture for each session follows the chronological movement of the biblical story.

Study Manual content illuminates some aspect of the Jesus in the Gospels each week and connects Scripture to daily life and Jesus' call to discipleship.The overarching aim is to deepen discipleship through better understanding of the biblical texts and their message.  The study helps group members understand that Jesus is rooted in Judaism and the Scriptures of Judaism and that Christianity and the New Testament are rooted in the Scriptures of Judaism—our Old Testament.

The Study Manual guides daily study and preparation for the weekly group meeting. The main elements in the format are designated by scriptural phrases:

“They have no wine” (John 2:3) is a brief statement about the human condition and alerts the reader to some aspect of daily life that Scripture can shed light on.
“Beginning with Moses and all the prophets” (Luke 24:27) is a way of referring to Scripture as a whole and signals the fact that we can understand Jesus in the Gospels better by understanding the Old Testament better.
“Do you want to become his disciples, too?” (John 9:27, New International Version) is designed to stimulate thoughtful reflection so readers can come to their own conclusions about what their own discipleship calls for.
Accompanying each day’s Scripture reading assignments are suggestions of things to look for that take the reader deeper into Scripture. As readers become aware of detail in Scripture, they might ask themselves repeatedly, What am I to make of this? The study manual provides space for writing notes on insights, observations, and questions related to the Scripture, and for putting into words personal perceptions of Jesus from the week’s Scripture. 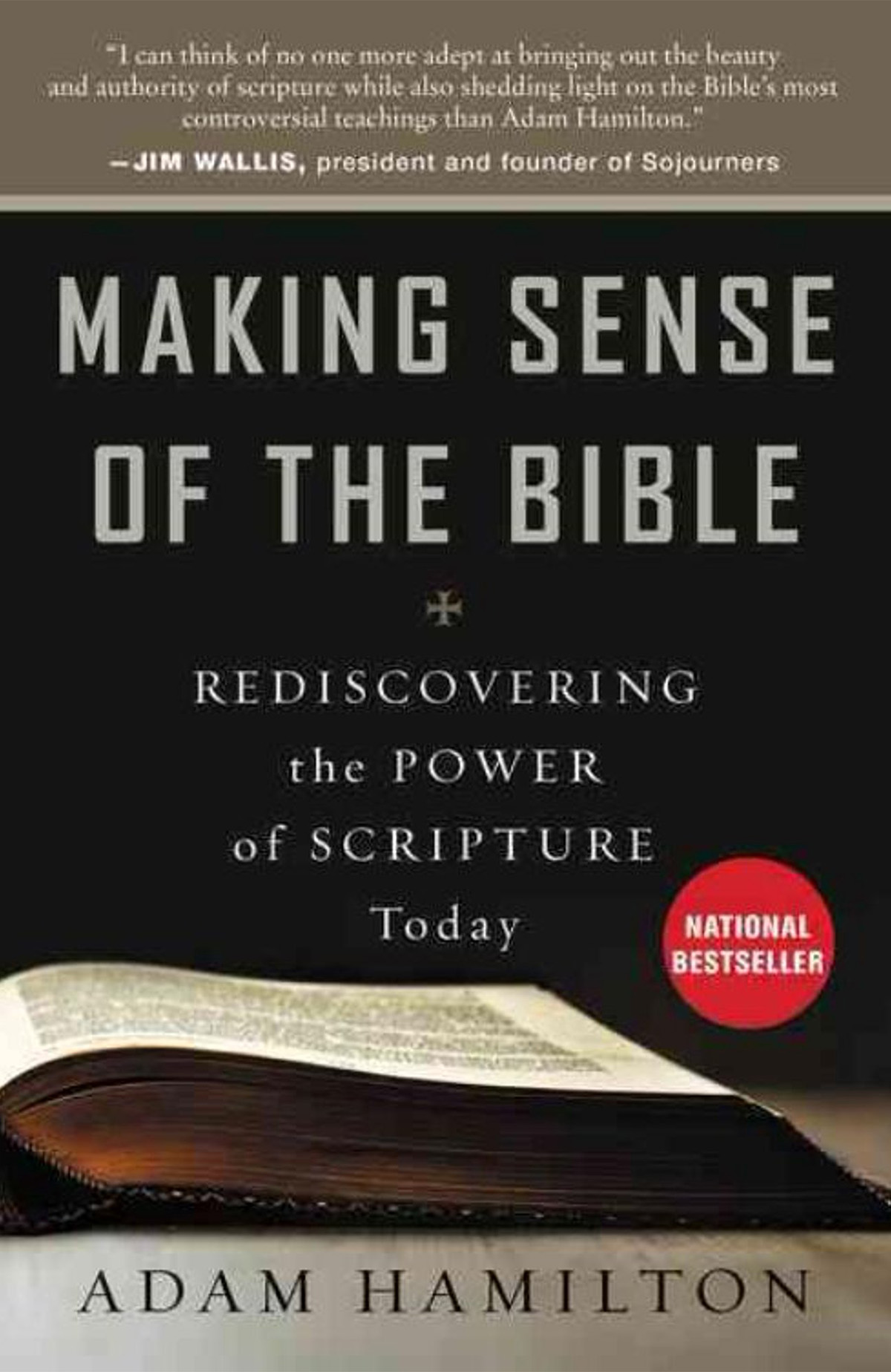 Making Sense of the Bible
Rediscovering the Power of Scripture

Denominations from evangelical to mainline continue to experience deep divisions over universal social issues. The underlying debate isn't about a particular social issue, but instead it is about how we understand the nature of scripture and how we should interpret it. The world's bestselling, most-read, and most-loved book is also one of the most confusing. In Making Sense of the Bible, Adam Hamilton, one of the country's leading pastors and Christian authors, addresses the hot-button issues that plague the church and cultural debate, and answers many of the questions frequently asked by Christians and non-Christians alike.

Did God really command Moses to put gay people to death? Did Jesus really teach that everyone who is not a Christian will be assigned to hell? Why would Paul command women to "keep silent in the church?" Were Adam and Eve real people? Is the book of Revelation really about the end times? Who decided which books made it into the scriptures and why? Is the Bible ever wrong? In approachable and inviting language, Hamilton addresses these often misunderstood biblical themes leading readers to a deeper appreciation of the Bible so that we might hear God speak through it and find its words to be life-changing and life-giving.